What reindeer and Indigenous perspectives can teach us about climate change 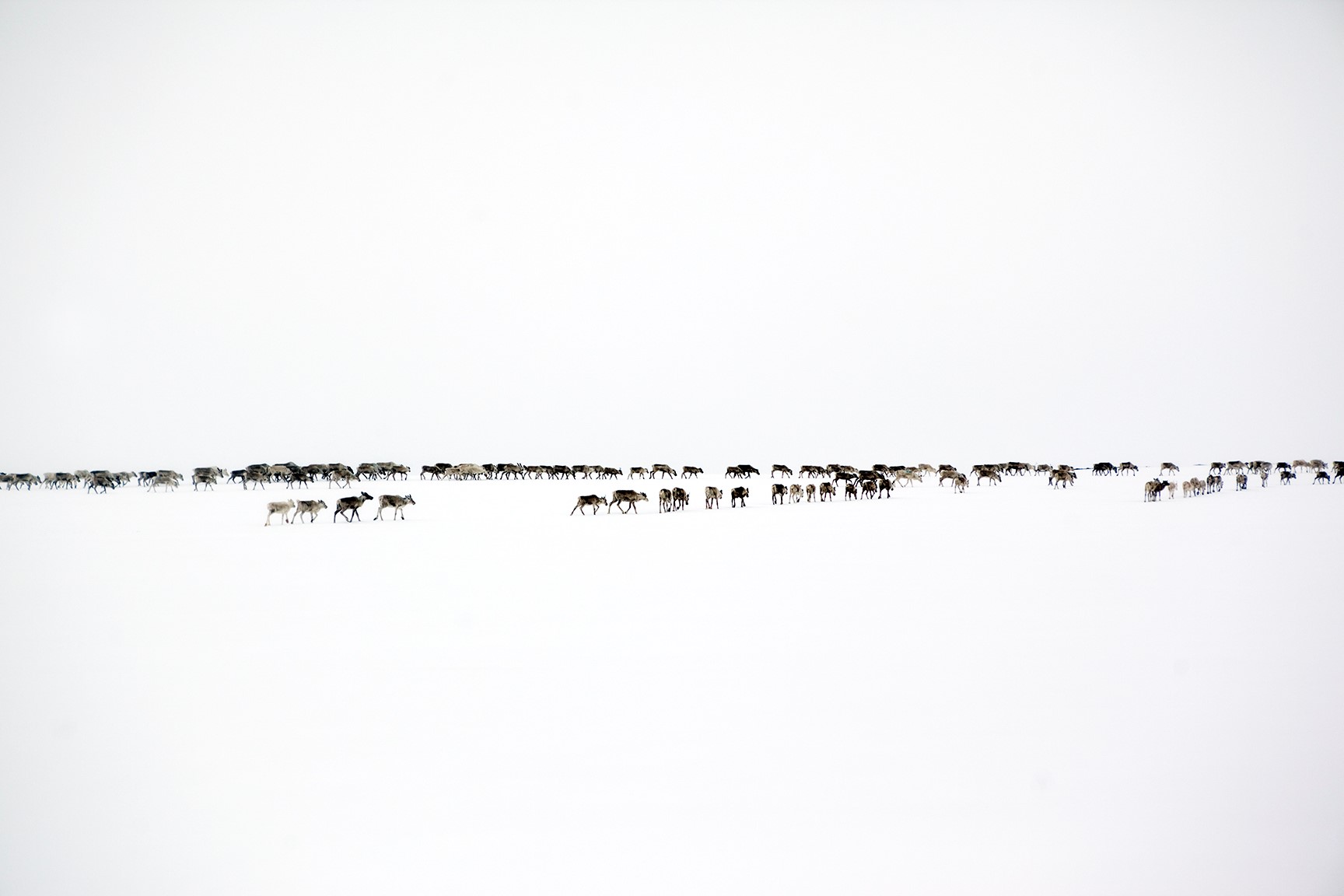 Above a photograph illustrating the perspective of a reindeer herder by Erika Larsen. She is a transdisciplinary storyteller and her powerful work includes the project ‘Walking With Reindeer’ in which she documents the life of Sámi Indigenous People. Click here to view the rest of her interesting collection.

Imagine someone asking you to describe Europe; what would your first thoughts be? You will probably think of historic capitals, the variety of Romance and Germanic languages, and rich development once driven by an abusive colonialist system. Something as ‘otherly’, how Edward Saïd would put it, as a large Indigenous community with extensive history does not come to mind quickly when imagining the European geographical area.

It is, however, necessary for us Europeans―though I account it to all Westerners that enjoy privileged backgrounds―to add Indigenous communities in Europe to the collection of the conscious. The upper north of Europe, characterised by arctic landscapes, is the home of the Sámi Indigenous People who found a way of living in the region long time ago. But who are the Sámi and what can we learn from their lifestyle about climate change? Turns out to be pretty much.

During my visit to Norway in March 2022 I had the opportunity to visit a Sámi herding spot. Among the Sámi that welcomed the group of visitors to their camp, one Sámi girl in particular, Inga, managed to grab my attention with her powerful story-telling skills and strong character. Her stories convinced me that bridging the gap between modern and Indigenous communities is an absolute necessity for the survivability of all people―perhaps an area where interculturalism should have greater influence. Understanding each other requires stepping out of our comfortable realities and dip-toe into unknown waters. I therefore challenge you to think from the Sámi point-of-view: the reindeer.

Before we start delving into the essences of this essay, first some basics. The territory of Sámi (called Sápmi in Sámi language) stretches over four countries: Norway, Sweden, Finland, and Russia. Like many other Indigenous Peoples, Sámi are survivors of colonisation and oppression, and continue to face deep-rooted discrimination. Inga explained that Sámi were forbidden by European settlers to use their language and customs, and were forced to assimilate to ‘modern’ standards [note: I placed ‘modern’ between apostrophes because I find its associations challenging; a separate essay can be written on the meanings of modern!].

These power dynamics, without any doubt, had enormous consequences for their quality of life. Luckily, the Sámi managed to successfully revolt against forced assimilation efforts since the second part of the twentieth century. This led to the gradual solidification of Sámi rights in various treaties, such as in Article 3 of the Treaty of the European Union[1] and national jurisdictions[2]. Although the protection of Sámi heritage improved significantly since then, former systems of oppression left their mark on the community. Continued hate speech against Sámi is one of them―something Inga experienced herself. Furthermore, there is still a great need for attention and acknowledgement for their centuries-old traditions and knowledge. I will explain the reason why further below.

As briefly introduced above, the reindeer to Sámi is what the sun resembles in our universe. Traditionally, Sámi get most of their resources from reindeer, which is the reason why they follow herds during their migration to the winter and the summer lands. Changing landscapes as the result of climate change are, however, causing major obstacles in migratory patterns that make reindeer increasingly vulnerable.

For example, since reindeer follow the same arctic routes during migration, they risk drowning during the tidal of seasons due to early melt of otherwise solid, frozen lakes. Although reindeer are actually good swimmers―they have buoyant, oxygen-filled skin―getting pulled into deep, wide waters together will likely lead to death anyway. Another problem is the creation of ice layers on fruitful soil. Rainy weather during the winter period in Northern Norway occurs more often than decades ago resulting in ice layering on soil during the arrival of frost at night. Normally, reindeer could dig with their hooves for food, but this method of food gathering becomes nearly impossible with solid ice on soil. In worst case scenarios, reindeer die of starvation because of this meteorological development.

The worth of a single reindeer to Sámi cannot be clearly expressed in Western logic. Perhaps money would be the modern equivalent to express its worth, but even that comparison is insufficient. Inga explained that Sámi can get monetary compensation from the government if a reindeer passes due to unnatural circumstances.

However, since the worth of reindeer cannot be truly articulated to money, needs and wishes are not always met for the Sámi families that depend on the herds. According to Sámi logic, there should be a difference in compensation between losing a male or a female reindeer. When a male reindeer passes, you lose the resources of one reindeer. But when a female reindeer passes, you lose resources of the reindeer plus the lives it would give afterwards in the form of new-born calves. Understanding each other’s reasoning is in this case, again, vital to achieve mutual satisfaction within affected communities.

The stories of cultural disparity between Sámi and modern thought do not exist as a separate entity, but are felt in similar dimensions by many other Indigenous communities. Due to the lack of understanding within modern societies about Indigenous ecology and the interconnectedness of natural life, modern and Indigenous reasoning conflict. Instead of working together with nature, the modern world prefers to take control over it. Giving priority to capitalist money-making ‘machines’ is another pivotal point of conflict, which, I believe, can in general be described as one of the core problems within the modern state’s inability to perform effective climate action.

Examples of such revenue-based conflicts can be found all across Lapland, such as the establishment of wind turbine farms or mining sites on reindeer grazing lands. It seems through these examples that even in liberal Europe capital is still prioritised over the lives of people. And although Sámi parliaments have been established in the Nordic countries to represent Indigenous voices, current reality somehow does not lead to sufficiency for all, yet.

Lessons to be learned

The fact that connections need to be strengthened between the Norse and the Sámi, between the modern and the Indigenous, is clear. Understanding each other’s views on life can bring each of us a lot, including a possible increase in survivability chances on earth. When we learn to see the value of for example a reindeer, we learn how to appreciate our surroundings differently as a consequence.

Try to think of something that represents the sun in your private universe. Obviously, the thing you consider most important probably lures your attention and actions the most. What would some of the key actions be to sustain the central object within your orbit? It starts with cherishing and respecting the object, and consequentially, you will also protect its environment. Just imagine how starkly different our actions would be if global systems put environmental health before profit.

Place nature at the centre of your universe, and the rest will follow.

Learning how to adapt to the forces of Gaia and how to take better care of nature is a mission of us all. Indigenous communities are absolutely vital for the successful restoration of our damaged environment―we have a lot to learn from mentalities that are not tainted with the (almost) unconscious drive of profit-over-people. In order to achieve greater connectedness and understanding, interculturalism of the deepest levels are necessary to tear down our walls and achieve mutual understanding for our values. And this, I am sure, will bring us to intellectual higher grounds and move us to a better version of all communities.

[1] Treaty of the European Union, Article 3

← Coffee with MG: diversity and inclusion with Gary Thomas, Managing Director-Assist GmbH Coffee with MG: diversity and inclusion with Garima Tyagi, HR business partner leader for Verizon India →
We use cookies on our website to give you the most relevant experience by remembering your preferences and repeat visits. By clicking “Accept All”, you consent to the use of ALL the cookies. However, you may visit "Cookie Settings" to provide a controlled consent.
Cookie SettingsAccept All
Manage consent