Cultural Trauma and Identity: How A Cruel Past Can Generate Ukrainian Strength 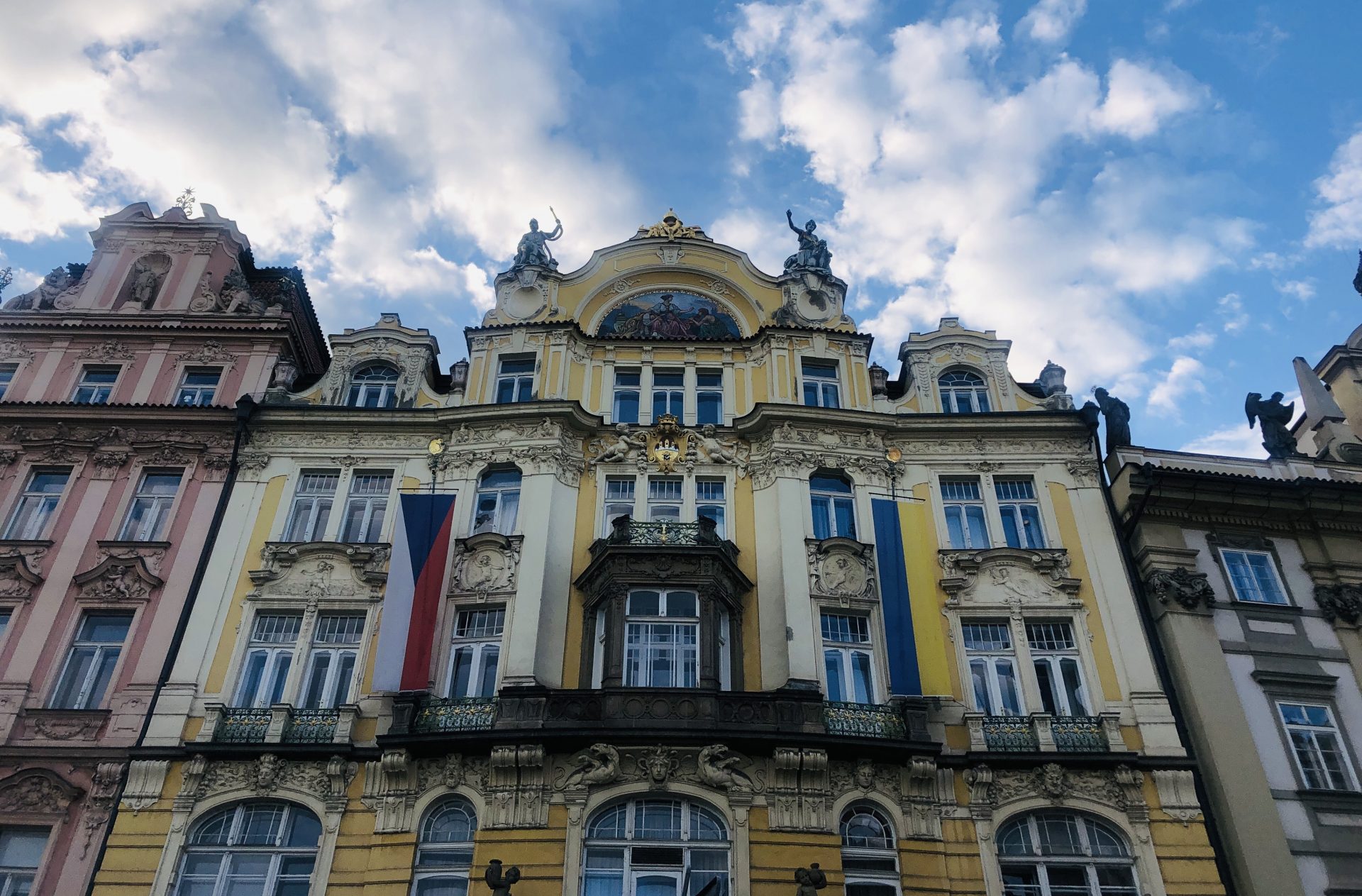 The Czech capital, where freedom was not a commonality for a long time, breathes solidarity with Ukraine.

Political and military oppression by Russia, currently witnessed in Ukraine, is unfortunately a familiar story for many other Middle and Eastern European states. A few decades ago, Russian dominance presented itself closer to the heart of the European continent – or, perhaps I should rather say in its heart.

Citizens of the Czech Republic, then Czechoslovakia, entered another uncertain period of fear and oppression after the Second World War, which already left its disastrous marks on the Czech community. Although not all Czechoslovaks opposed communistic influence, Prague’s 1968 uprising was nevertheless a clear indicator that a significant part of society called for the halt of further Soviet domination.

At this point, you may wonder what more can be explored regarding Ukraine’s and Czechoslovakia’s shared history of Soviet oppression. How is our past connected to the present, and in what ways does the past penetrate itself into today’s societies? Were it not for a particular cultural trigger effect I experienced because of my Czech identity, it would not come to mind to explore this topic further. This post explores the collective trauma experienced by Czechs in the Communist era and how past cultural trauma can pulse through today’s communities by means of cultural identity.

Life Under A Cruel Star

Although experiences during historic events can be subjective according to personal circumstances, it can be said that there was a common sense of despair during the Communist period in Czechoslovakia. As outlined by Heda Margolius Kovály in her book Under A Cruel Star: A Life In Prague 1941-1968, there was hope for an egalitarian system after World War II by living up to communist ideals, but the implementation of a communist political system turned out to be for the worse.

The book Under A Cruel Star: A Life In Prague 1941-1968, a memoir by Heda Margolius Kovály, shows an excellent and heart-breaking glimpse of what life used to be in Soviet controlled Czechoslovakia.

Even families that initially supported the Communist Party, such as Margolius Kovály’s, were at high risk of a cruel fate. Unjustified imprisonments, betrayal, fear to speak out, and corruption belonged to the palette of daily cruelties many Czechs had to endure under the rule of the cruel star. Everything that could damage the status of the ruling party was seen as treason, a threat, and a reason to diminish people’s lives.

‘The Russians Are Back’

Cultural trauma forms its shape “when members of a collectivity believe they have been subjected to horrendous events that leave indelible marks on their group consciousness, marking their memories forever and changing their future identity in fundamental and irrevocable ways” (p. 139). Political oppression from the past resulted in the finding that many Czechs today still consider Russian immigrants to be intruders within the state, according to this article by Klvanova (2019). In her research, she explores collective memory and symbolic boundaries of Czechs formed during Soviet takeover. The socialist status quo terrorised the daily lives of many Czechs for a significant period – at first explicit, then subtle.

Research by Evanson (1986) about political repression in Czechoslovakia shows that before the Velvet Revolution of 1968 a more evident political crackdown was imposed on opponents of the communist system. However, to conceal the repressive character of the government, political persecutions were operated in the shadows of society after the uprising. A significant increase in ‘less severe’, non-political offences under the umbrella term ‘misdemeanours’ is a reason to believe that the state operated under a hidden agenda to crackdown opposition.

The cultural pillars we build history on

It is very reasonable to think that such traumatic experiences, in combination with the inability to express oneself freely, resulted in feelings of hopelessness and a longing for cultural independence in many ways. After all, the area now considered the Czech Republic endured decades of cultural oppression even before the Soviet invasion. The prolonged hardships experienced by many Czechs led to strong collective dismissal of oppression, formed as a cognitive blueprint, which is again relevant today; keep your hands off Ukraine.

What must be noted is that the war in Ukraine is not merely a war for political influence or land grabs – it is a war of culture, too. European cities are draped in Ukrainian flags, Ukrainian markets are organised to financially support NGOs, and the Ukrainian victory in the Eurovision 2022 contest trail to the idea that military strength also lies in culture. As pointed out by Anne Applebaum in her article on ‘Ukrainianness’, Putin perceives Ukraine not as a military threat, but as an ideological threat. The Czech Republic knows a little too well how Russian oppression feels, and as witnessed by myself last June, Prague especially breathes solidarity with Ukraine.

How does cultural identity fit into this thread, then?

The way our ancestors organised society determines the base, with all its belief systems, of the society we grow up in. Consequentially, this impacts how we engage with each other, albeit slightly unconscious or implicit. Gender and race discrimination are perhaps among one of the most widespread examples that illustrate the idea. Even though many of us like to believe that we live in a modern era where many are aware of prejudice and reject discrimination [“Discrimination? How can something like this happen in the 21st century!”], we cannot become reluctant about the fact that change does not happen overnight and needs continuous stimulation.

People cannot simply ‘turn off’ discrimination, and engrained experiences from the past constitute the pillars that carry the generations of today. When something as devastating as prolonged cultural trauma terrorises an affected community, it might be even more challenging to simply alleviate the pain experienced by former generations. Cultural trauma changes the way of thinking, and settles in the community’s cultural identity and collective consciousness. Cultural identity is not merely a form of expression during the life-span of one human being; it is a connector to our past and can determine how we will act in the future.

The journey of cultural identity…

The cultural trigger effect enabled by an event such as a war on national culture and independence is not necessarily confined by state borders. What once started as a feeling of ‘Ukrainianness’ or ‘Czechness’ centuries ago has the power to travel to the present and make itself visible in various communities.

In our globalised world, by means of for example biculturality, alarm signals can travel across borders to reach their receivers in case of cultural threat. A normally silent identity in a bicultural person may suddenly awaken and present itself stronger than ever before, making bicultural identity rather a fluid than a constant concept. The goal of the magnet effect that draws the person closer to the other identity is to protect the culture currently under attack. Direct threats on culture can strengthen identity pride and make (bicultural) people long for their (other) place of origin only to protect what’s dear to the greater cultural collective.

… and the backbone of our societies

Ukraine shows us that cultural ideology is not a soft concept, but the rock-solid backbone that can save a community. When under threat, culture can act like a magnet and draw people closer to protect the core. In order to truly understand political beliefs, it is necessary to apply the cultural lens to see where political desires stem from. Does culture then precede political power, making culture the more influential instrument? And is the thing people are, sometimes unjustifiably, fighting for all about the preservation of cultural habits that constitute the link to political power?

I believe this is definitely up for debate. In any case, both areas should be analysed together during Putin’s terrible ideological war. And next time a West-European political analyst believes Ukraine should ‘keep calm’, I hope that person considers the cultural identity of the Ukrainian, the Czech, and the formerly oppressed.

← What reindeer and Indigenous perspectives can teach us about climate change
We use cookies on our website to give you the most relevant experience by remembering your preferences and repeat visits. By clicking “Accept All”, you consent to the use of ALL the cookies. However, you may visit "Cookie Settings" to provide a controlled consent.
Cookie SettingsAccept All
Manage consent