White Fragility: Why It’s So Hard for White People to Talk About Racism 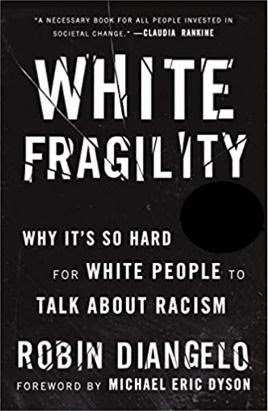 White Fragility: Why It’s So Hard for White People to Talk About Racism

When I pulled this book out of my mailbox and started to flip through the contents, I discovered that the typeface was so infinitesimal as to make it unreadable. I began to wonder if this were a racist ruse on the part of the publisher or simply an effort to economize, as publishing is now threatened by new technologies. In any case, I returned the paperback to the seller and ordered an electronic version.

The key sentence in this book is found on page 149 in my edition, ”….a positive white identity is an impossible goal.” The author elaborately and fully lays out the case and extensively lists in detail the myriad accusations pointing to white supremacy, white privilege, the inescapable benefits of being white and the impossibility of excusing or dodging this label, whatever one’s history, experiences, and level of human solidarity. There are no excuses for being white, however one achieved that status, particularly in the USA where the chosen people, not without struggle assimilated even somewhat darker complected inferior Europeans, even Papists into the world of whiteness.

For white men like myself who have been engaged more than three quarters of my life in promoting equity ideas and activities, there was not much in this book that I have not heard or had not been addressed to me personally. Only a few days ago I did my best to swallow blistering black anger at my whiteness in an online discussion with people whom I’ve never met personally. There was no defense, as uncomfortable as it might make me. There are no excuses for being white and no escape hatch from our submersion in unearned privilege, particularly as a male of the species, whatever one’s class or status.

My experience has been that it is not difficult to talk about racism or even admit it in our cultural and psychological makeup – the challenge, or perhaps I should call it the temptation, is to get a word in edgewise when all that is expected of me is careful listening to anger and apologizing where I may have disagreed or made a misstep in something that I said or unconsciously allowed a mini-aggression to occur.

Despite her mastery of the topic, and the wealth of detail she offers about how whiteness thinks, feels and expresses itself, Diangelo, when raising the question of “where do we go from here”, seemingly has nothing more to offer beyond an obligatory listening and swallowing and apologizing. While these may be functional in the moment, how we as interculturalists might go about the more productive steps of dismantling systemic racism in political, organizational, social and educational structures and institutions needs a for more potent response. How shall we effectively identify and deconstruct the cultural metanarratives supporting racism? A strategy for this must be an essential part of our agenda whether or not those of us who are white are considered allies – we should not automatically expect it. As a US American who is an expatriate but refuses to be an ex- patriot, I am holding my breath to see how we can respond as diversity and inclusion education is now being actively jettisoned by the POTUS.

← The Descent of Man The Cultural Personality  →
We use cookies on our website to give you the most relevant experience by remembering your preferences and repeat visits. By clicking “Accept All”, you consent to the use of ALL the cookies. However, you may visit "Cookie Settings" to provide a controlled consent.
Cookie SettingsAccept All
Manage consent