What is the role of the interculturalists in the red line between fighting for diversity and preserving national cultures?

CCC-Break 25 March 2022
What is the role of the interculturalists in the red line between fighting for diversity and preserving national cultures?

In October 2021 in Brussels, Commissioner for Equality Helena Dalli unveiled internal guidelines on ‘inclusive communication’ for Commission staff, detailing phrases to be avoided. In addition to terms related to gender and sexual orientation, the list included terms related to Christianity, like Christmas and the names Maria and John.

Therefore, the question for this CCC Break was: “Where is the red line between the struggle for political correctness and diversity and the preservation of what our civilization relies on?”. What can we undertake, as interculturalists, regarding this?

The discussion was quite intense, and many perspectives evolved during the conversation.

What we are discovering from the intercultural dimension of neuroscience is that culture represents a process that lives inside of us, an evolution of culture. There is no red line only change. We are in a process of constant cultural formation. The question is how can we open our culture and invite others to the table with mutual benefit and understanding?

Other state the perfect dilemma, where one wishes to preserve an identity while another to invite diversity, but they are not mutually exclusive. One doesn’t exclude the other, there are possible combinations of fusing both.

Two ideas emerged from the conversation:

One of our colleagues shared a personal and human story, describing an important educational process or a personal transformation to acceptance of new local holidays to be able to integrate into a new society. Another colleague stated that for some people there is a necessary red line.

There are many ethnic groups around the world where preservation of culture is key to avoid extinction. Therefore, there are two sides: those who are open to change and novel ideas, and those whose identity is at risk to be erased due to adaptation. For the latter ones, there is a red line. There was in addition a voice that such a bold statement, as cancelling Christmas, can lead to fear and complete rejection instead of constructive dialogue.

But the burning question is silent on the table: what can we, as interculturalists, do to preserve cultural differences? This question suggests no answer at this moment, but remains promising, as all participants proved a will to continue working on it. And one more question was raised which is crucial: adapting doesn’t mean denial of our own culture; but how do we make this process enriching?

Thank you  for this summary of our CCC Break discussion to our Contributor and thank you to our SEU moderator for facilitating the event:

Thank you for the intriguing discussions to our participants: 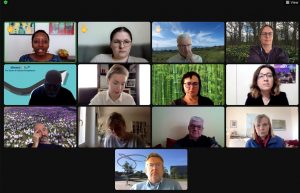 ← What is the role of interculturalists in the fight against climate change? Coffee with MG: diversity and inclusion with Gary Thomas, Managing Director-Assist GmbH →
We use cookies on our website to give you the most relevant experience by remembering your preferences and repeat visits. By clicking “Accept All”, you consent to the use of ALL the cookies. However, you may visit "Cookie Settings" to provide a controlled consent.
Cookie SettingsAccept All
Manage consent