The Descent of Man 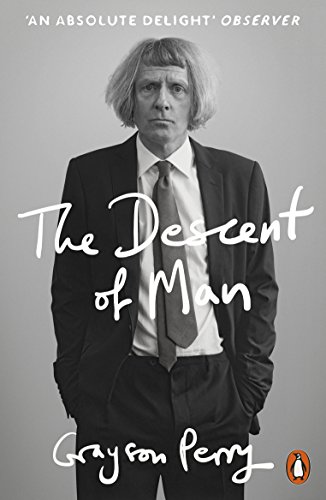 The Descent of Man

In The Descent of Man, Grayson Perry has provided readers with an entertaining yet surgical look at the current stresses of masculinity, its so-called crisis and stereotypical toxicity. There is nothing wrong with men per se, but they easily fall victim to a cultural imprisonment where their values and behaviors are distorted, exaggerated, narrowly framed and put on a slippery slope to depression, anger, and violence toward self and others.

Rather than a scientific psychological or socio-cultural analysis, Perry provides us with the truth-telling and innovative perspectives of an artist as he sorts through the everyday of the male experience. Not bound by the metanarrative that punishes flexibility and holds out unattainable awards for machismo, he is free to dress as he likes and mess as he likes with the cultural dogma that guarddogs men and leads to our disposability. We have rights to be different, and the book not only concludes with but is a manifesto of these rights to a fuller manhood. Manhood does not have to be played as a zero-sum game, and Perry is himself evidence to this claim.

By pointing out the popular acceptability of blending contemporary masculine ideology with “common sense”, Perry challenges us with a practical example of how the metanarratives that constitute our realities and become unassailable, undeniable, unconscious and self-justifying frames. They are accepted as nature, as the way things are, no matter how painful and destructive they may be. Perry powerfully delivers an insight that those of us who claim to be students of and teachers about culture need to add to the cutlery needed to cut into it, taste it and digest it as well as dare to explore new recipes for cooking it up.

Perry exposes how what we hold as “common sense” challenges us with an assumption: “Gender feels as natural as breathing. How could it be learned?” Not only do we perform our roles in the drama of life, but we are given a script to follow. As the author notes, “Our most basic, most ancient cultural form is the narrative. Stories affect us at the deepest level. We all hold the stock of myths, legends, folktales, gossip and epic dramas within us.” This is what we inevitably resource as each of us struggles to be “a good man.” Gender is performative.

There is a lot to not like about the current definition of masculinity. The author does not mince words nor hold back his anger and disgust about the flailing and failing fashions that we grasp for as success symbols in the search for manhood. Masculine emotions, no doubt, but Perry reroutes these “real man” outbursts with clever examples, metaphors and just darned good writing. Noting that, “When he dons a uniform, a man takes on a bit of the power of all men who wear that uniform,” Perry reminds us of our tribal status. Despite his critical incisiveness, however, Perry is an optimist, expressing solid faith in the goodness of men, hope in their coming together in groups to talk about themselves, support each other and discover new avenues of growth.

The book is sprinkled with provocative cartoons that both illustrate and explore contradictions and new directions which the text addresses. In all, a pleasure to read, a work of art to admire.

← Why I’m No Longer Talking to White People About Race White Fragility: Why It's So Hard for White People to Talk About Racism  →
We use cookies on our website to give you the most relevant experience by remembering your preferences and repeat visits. By clicking “Accept All”, you consent to the use of ALL the cookies. However, you may visit "Cookie Settings" to provide a controlled consent.
Cookie SettingsAccept All
Manage consent