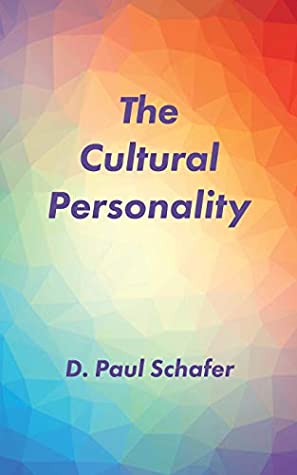 Lately, there has been a recent resurgence of interest in archetypes and personality templates. Some are revisiting Carl Jung’s archetypes and others, particularly concerned with the decline of male identity, harken back to Joseph Campbell’s heroes. We are looking for something, perhaps something we sense we have lost. Paul Schafer’s work offers us a fresh approach to identity formation information, a new model, if you will, something that pulls old models together and allows them to work for us again.

Put briefly, The Cultural Personality expresses Schafer’s belief that human beings should be holistic, centered, creative, altruistic, and humane. If this sounds abstract and vague, perhaps a bit too touchy-feely, this short essay is about the thinking and behavior that give the cultural personality substance, flesh and bones, heart and soul. The author begins our journey by a hard look the demands of the current con text in which we live. This necessitates the emergence of the concept of the cultural personality and its resultant behaviors, namely living out this model in our everyday words and actions. All this in slightly less than 100 pages.

We are immersed in and we are culture, as well as being its makers, so why should we not be known as such? One contemporary temptation is to abandon the hard-won riches of humanity, to escape into a naysaying individualism, deliberately not knowing whence we came and where we are going. The alternative temptation is to adopt a narrow protective, populist shell, excluding all culture but that proudly touted as one’s own. Many young people today are either floating meaninglessly “above it all” or immersed in the meanness of Generation Identity.

We need to turn inherent and ambient culture from being a burden on our lives to a treasure house of resources. In a world knowing violence and pain as well as commodification of all sorts and at every level, this may not be easy. We have a choice, not simply of which mask to wear but which persona to create. Yes, we become individuals, we achieve uniqueness, but not through the sour emptiness of rejection but rather through the transparency and embrace of enlightened perception, which, if we are to believe what current neuroscience is telling us, becomes not just something we have but something we are.

The pages of The Cultural Personality model what they preach, delving richly into worldwide cultural resources and the wisdom of those who have yearned for, ingested and broadcast them throughout the ages. Too often, I hear the claim that abandoning one’s cultures allows one to claim to be a “cosmopolitan”, not realizing that the word cosmos means ‘the world” but it contains the sense of its beauty, order and integrity. We thank the author for reminding us to embrace it.

← White Fragility: Why It's So Hard for White People to Talk About Racism  How They Made It in America: Success Stories and Strategies of Immigrant Women →
We use cookies on our website to give you the most relevant experience by remembering your preferences and repeat visits. By clicking “Accept All”, you consent to the use of ALL the cookies. However, you may visit "Cookie Settings" to provide a controlled consent.
Cookie SettingsAccept All
Manage consent