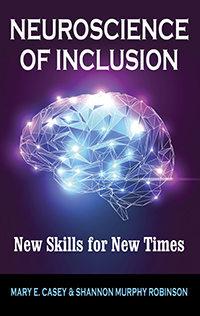 At the end of the last SIETAR congress in Leuven, Shannon Murphy Robinson received the award as the best speaker for her presentation on neuroscience and inclusion. Her passionate, informative talk highlighted key ways the brain can work both for and against inclusion. And it’s no surprise that her book, Neuroscience of Inclusion, co-authored with Mary Casey, is like her talk. It offers a new understanding on how we can work across cultural differences effectively.

Reviewing the latest brain research done with magnetic resonance imaging (MRI), the two authors report on how neuroscientists can now scan the brain in real time as it engages in critical thought, analysis and problem-solving. And what these researchers have found out about inclusiveness toward other cultural groups is that it’s a difficult task. Simply put, the brain prefers people who look like us over people who don’t, and it only takes about 200 milliseconds to do this. Second, brain circuitry is constructed in a defensive “survival mode”. It registers differences as a threat, which means it makes quick decisions on whether a person is a friend or a foe. This, in turn, triggers other circuitry: moving-toward or moving-away behavior.

Essentially, the brain has an unconscious us bias for similarities, a built-in tendency to create “in” and “out” groups in order to ensure our survival. When looking back at evolution, cooperation occurred within groups, but not between groups. It has not changed much today, despite all the rational arguments that we need to be inclusive in a globalized world. As one researcher clearly pointed out, “There may not be lions or bears roaming the halls of your organization, but people’s brains are oriented to perceive threats.”

Yet, there are ways we can override the brain’s defensive tendencies and even re-pattern our natural dynamics. Authors Casey and Robinson make an enormous contribution to intercultural communications by offering brain-based strategies and tools for working across differences that outsmart the defensive brain to build trust, foster creativity and generate constructive interactions.

One strategy is to engage in a “care frame”, meaning one consciously engages a feeling of appreciation towards another per son–or group of people–as we communicate with them. This attitude reduces perceptual narrowing and supports the higher brain (pre-frontal cortex) in staying focused and empathic. Positive thoughts and feelings from one person are directly replicated in other people’s brains through the “mirror neuron” system. The more we consciously engage in positive regard, the more the brains of others mirror a positive response, creating an “upward spiral”, thus better intercultural communications.

This book is an excellent survey of the latest research into the mind and provides a scientific foundation for increasing inclusion.

A definite read for all SIETARians.

← Cross-Cultural Management with Insights from Brain Science Extraordinary Experiences: Tales of Special Needs Abroad →
We use cookies on our website to give you the most relevant experience by remembering your preferences and repeat visits. By clicking “Accept All”, you consent to the use of ALL the cookies. However, you may visit "Cookie Settings" to provide a controlled consent.
Cookie SettingsAccept All
Manage consent