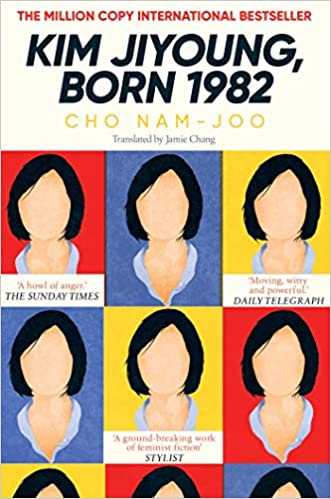 Ever since taking classes on prejudice and discrimination during university, I was very interested in the feminist novel Kim Jiyoung, Born 1982. From what I heard, the book provides a good perspective on the position of women in Korean society, and since I was living in Japan during my graduate studies, it could give valuable insights of the geographical region I spent my precious years in. Moreover, I found out that the book is an international bestseller which sold a million copies and was adapted into a film in 2019. How could I resist any longer to read it? A few weeks ago, I finally managed to find a copy of the English translation.

The main character Kim Ji-young, which is a common Korean name, represents the ordinary lives of Korean women and mothers currently in their forties, their history included. The book provides the reader with a good mix of fiction and facts, giving the reader the feeling that Kim Ji-young actually exists. The story starts with Ji-young’s birth in Korean society, how her life gradually develops, and the hardships she faced at different stages during her life. The writer Cho Nam-joo, who is a former television scriptwriter, went down the usual life path for females in Korea and therefore partly drew on her own personal experiences. Pointed out as one of the greatest dilemmas most Korean women need to face during their lifetime, Cho herself quit her career when she gave birth.

What I found pleasant about the book is that it is an easy read while simultaneously addressing the complexities of systematic gender discrimination. This means that anyone can understand the topics discussed in the story without finding themselves struggling with certain terminology. The mix of fiction and facts make it a lively and compelling story. The text reads lightly and, attached with deeper meaning, the words fulfil their role as easy stepping stones for the eyes from one paragraph to the other.

Another important feature of the book is that it compellingly outlines how gender discrimination against women in Korea happens during every stage of the life cycle―the school girl, the career woman, the mother, and even the foetus will get her portion of prejudice. The fact that Cho has experienced gender discrimination herself becomes evident in many parts of the descriptions of Ji-young. Cho’s story is a clear cry for the need for recognition of women’s issues in Korean society, which she expressed by giving detailed descriptions of the downright painful experiences Ji-young has to pull herself through. For the female audience, some events in the book might seem familiar. The patterns of gender-based discrimination drawn from the main character’s experiences are not only limited to Korea, but can apply to many modern societies.

In my opinion, it is recommended to do a little personal research into gender discourses in Korean society before or after delving into Kim Jiyoung, Born 1982. Some examples from Ji-young’s story are currently pressing issues in Korean society, such as wide-spread digital sex crimes targeting women. Another interesting thread is the recent election of anti-feminist President Yoon Suk-yeol in March 2022. I find the latter especially interesting to follow since the presidential elections showed a clear division between young male (pro-Yoon) and young female (anti-Yoon) voters. It is definitely valuable to read a little on these topics as it can make Ji-young’s story all the more lively.

To conclude, let’s ask ourselves one final important question: who is Kim Ji-young actually? The back side of the book describes the answer to that question perfectly:

Kim Jiyoung is a girl born to a mother whose in-laws wanted a boy.

Kim Jiyoung is a sister made to share a room while her brother gets one of his own.

Kim Jiyoung is a daughter whose father blames her when she is harassed late at night.

Kim Jiyoung is a model employee who gets overlooked for promotion.

Kim Jiyoung is a wife who gives up her career and independence for a life of domesticity.

Kim Jiyoung is her own woman.

Kim Jiyoung is every woman.

← SIETAR Europa Board Statement on Ukraine Coffee with MG: diversity and inclusion with Gary Thomas, Managing Director-Assist GmbH →
We use cookies on our website to give you the most relevant experience by remembering your preferences and repeat visits. By clicking “Accept All”, you consent to the use of ALL the cookies. However, you may visit "Cookie Settings" to provide a controlled consent.
Cookie SettingsAccept All
Manage consent