How They Made It in America: Success Stories and Strategies of Immigrant Women 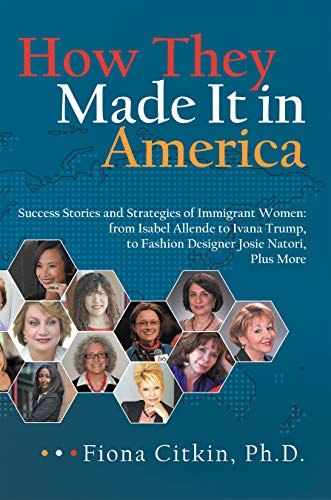 How They Made It in America: Success Stories and Strategies of Immigrant Women: from Isabel Allende to Ivana Trump, to Fashion Designer Josie Natori, Plus More

Discussion and conflict over the welcoming and acculturation of migrants and immigrants has reached new heights in many quarters and corners of the world. There is frequently a lack of appreciation of the contributions that newcomers make to a society, but there is as well a need for the kind of storytelling and experience-sharing that can motivate newcomers to overcome fresh obstacles and succeed in an alien environment. Theses stories can be effective in instructing them in the values and behaviors that can lead them in the directions in which they would like their lives to go. Dr. Fiona Citkin has provided just such a collection of stories about extraordinarily successful immigrant women in the USA that dispel ignorance and disdain toward immigrants as well as remove the hesitancy and blocks to define and pursue success on the part of newcomers.

The eighteen success stories, told about women arriving from every corner of the globe, with which the book begins, are not the end of the matter, but just the beginning, as the author goes on in the second part of the book to highlight seven values which led to the success described in their tales of achievement. She proceeds even further in part three to provide a kind of handbook to assist the newcomer along the path of managing one’s inner and outer resources to go forward in the desired life directions.

Not every person or culture understand success in the same way. Certainly, the USA often highlights “making it” in terms of financial success, status, and celebrity, and the characters Citkin’s tales often match these criteria. Despite this US American focus, the fulfillment of the American Dream, I would like you to see this book not just as a motivator for women immigrants to the USA or a feminist paean for breaking the glass ceiling, though it is indeed both of these things. I would rather strongly suggest this book as a model of meeting the need for providing inspirational and informational stories and cultural advice in the many cultures around the world that are receiving, hosting and educating newcomers, both women and men and preparing their populations to accept and include them.

Realistic challenges of challenges faced and how they are being met are best told by the immigrants themselves as they are experienced in treading the path toward desired success, however they and the host culture define success. Such accounts should fill the needs of both migrant and indigenous audiences as new neighbors to learn and go about discovering and connecting with each other, sharing their values and their aspirations. It is my hope that readers keep finding these stories in themselves and others and take them apart to examine their hidden treasures and living energies and not hesitate to tell them to each other. I am reminded of the quote I found in a children’s book Crow and Weasel by Barry Lopez, years ago, “Sometimes a person needs a story more than food to stay alive. That is why we put these stories in each other’s memory. This is how people care for themselves.”

Most importantly, it is imperative to recognize that being and becoming, acculturated into an alien environment is not abandonment of oneself and one’s native culture. Rather it is about truly discovering these in all their dimensions as they are highlighted in new environments, understanding them in new ways, and seeing how these contribute to one’s strengths and flexibility as well as enrich one’s self and one’s neighbors.

← The Cultural Personality  The Learner’s Journey →
We use cookies on our website to give you the most relevant experience by remembering your preferences and repeat visits. By clicking “Accept All”, you consent to the use of ALL the cookies. However, you may visit "Cookie Settings" to provide a controlled consent.
Cookie SettingsAccept All
Manage consent