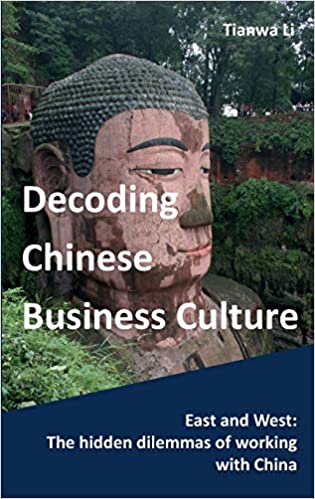 The hidden dilemmas of working with China

It goes without saying that China has become the most dynamic country in the world and will bypass the U.S.A. in GNP by 2030 according to most economists. Thus, it’s no surprise that the rest of the world is rushing to comprehend the Chinese, whether it be for business or pleasure.

Yet, for many Westerners, the Chinese mentality appears to be that of an enigma, difficult to unwrap and appreciate. There are many publications that attempt to explain this Asian culture, often with too much sophisticated academic jargon that doesn’t permit the reader to actually experience the Chinese mind. But once in a while, there comes a literary work that magically does that. “Decoding Chinese Business Culture” is such a publication. Written with sparkling simplicity and clear prose, the reader is immediately enlightened and transformed into what it means to be Chinese.

Raised and schooled in China until the age of 18, author Tianwa Li went abroad to start her university education in the UK. For the next fifteen years, she began a journey of decoding the dynamic Chinese business culture from the inside and from a Western perspective. Now, living in Germany as a consultant and an intercultural lecturer at German universities, she has written down her observations into an easy-to-read, short book.

Divided into 9 chapters, the first is entitled ‘Language Matter’, discussing why Chinese speech can be perceived as rude and domineering by Westerners, but not at all in the Chinese context. The second chapter deals with China’s past, present and future. Chapters 3-8 explore philosophical differences between China and the West, such as lies, conception of justice, nature of friendship and ‘self’, patterns of superior and subordinate relations, notions of leadership, logic and validity. The last chapter examines the current business environment with practical, real cases.

The 6th chapter was the most interesting for me. Entitled ‘All societies are unequal, but some are more unequal than others’, it’s a rather provocative, politically incorrect statement, purposely meant to intrigue. Tianwa Li writes about her interactions with a young German accountant involved in a joint venture with Chinese company. She was the lowest ranking in her German group and the Chinese manger ignored her and imposed his invisible superiority over her. Using Hofstede’s dimension of power distance, the author explained the strong hierarchical patterns in Chinese culture and how it conflicted with the relatively egalitarian behaviors in Germany. The German gained a new perspective and found a practical solution to work with the Chinese. In all, it’s a beautifully told story.

There are many other real-life stories that provide surprising insights and pragmatic ways of working with the Chinese — and done with a highly readable text and intercultural sensitivity. If you wish to rise to the China challenge, then get this book!

← Caste - The Origins of our Discontents  International Handbook of Love: Transcultural and Transdisciplinary Perspectives →
We use cookies on our website to give you the most relevant experience by remembering your preferences and repeat visits. By clicking “Accept All”, you consent to the use of ALL the cookies. However, you may visit "Cookie Settings" to provide a controlled consent.
Cookie SettingsAccept All
Manage consent