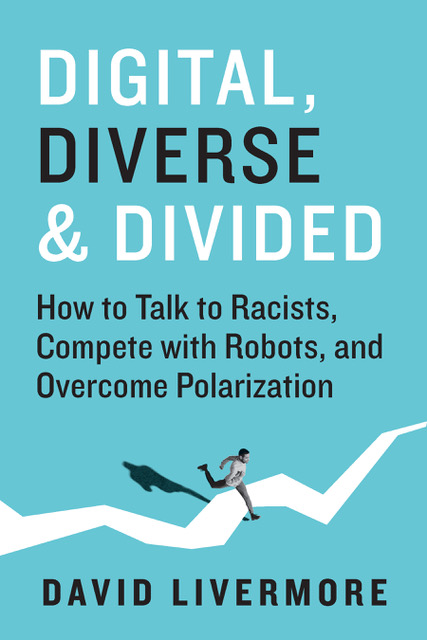 “Tackling polarization isn’t easy, but we can do it. So let’s get to it”

You have not heard from me in a while for good reasons and one of them was that I was busy reading. Generally, I would have coffee or tea with a chosen guest to bring you the long and short of it. This time, I ended up having gallons of tea with a book written by our last chosen guest, David Livermore. I am assuming that he had coffee while writing …so we will let the title sit!

Authored by David Livermore and published by Berrett-Koehler Publishers, Inc, the book Digital, Diverse & Divided calls for focussed attention primarily because of the importance of the topic in current times and the chatty way it has been written.

I had no interest in reading a pedantic book but one day, out of curiosity, I opened David´s book with the intention of reading just a couple of pages. However, the above quote and the subsequent example with which the book opens, caught my attention and I was hooked. Subsequently, I found more stories deftly woven into the whole with some from David´s own personal life, presenting a rich tapestry to tease the mind to attention.

“How to Talk to Racists, Compete with Robots, and Overcome Polarization” is what the book claims but I found that it does much more. It forces you to pause, think and reflect on everyday instances where we can refine our “human” ness in the changing times we live in.

David says “This book is about how to get along with people who are different. It sounds about as simple as you can get. It’s the first thing we’re taught in kindergarten, and it’s a standing topic at corporate off-site retreats and international diplomacy efforts. Yet we do it so poorly”. A valid point to which I wholeheartedly agree.

For me the case for reading the book was further made when I read the following lines:

“I’m convinced that polarization is the number-one issue facing our world today. Social media used to be a place to reconnect with long lost friends. Now it’s become a platform to spout political views and unfollow anyone who disagrees. Diversity programs were supposed to increase inclusion and belonging. Instead, they seem to exhaust everyone, including the individuals leading them. And families and friendships are being destroyed because we can’t agree on issues of race, religion, and politics. Now, based on research published in hundreds of peer-reviewed journals, cultural intelligence offers a better way forward. With cultural intelligence we have the tools to relate and work together without losing ourselves in the process. Cultural intelligence, or CQ®, is rooted in decades of research across 150 countries and it’s defined as the capability to relate and work effectively with people who have different backgrounds—nationality, ethnicity, gender, religion, politics, and more. CQ provides a practical, evidence-based approach for making sense of our differences and learning how to bridge our divides without forcing everyone to conform to the same thinking and behaviors.

The book is split into 3 parts:

The reading journey ends with questions and points of reflection, one of which I found to be a gem:

“If you could see through the eyes of one other world for a day, what world would you choose? Why”

And I could not find a better way than to leave you with that. Curl up and enjoy!

With lots of love from wintry Hamburg,

← What gives you hope? The podcast series "Between the East and the West" →
We use cookies on our website to give you the most relevant experience by remembering your preferences and repeat visits. By clicking “Accept All”, you consent to the use of ALL the cookies. However, you may visit "Cookie Settings" to provide a controlled consent.
Cookie SettingsAccept All
Manage consent