Coffee with MG: diversity and inclusion with Deepa Purushothaman 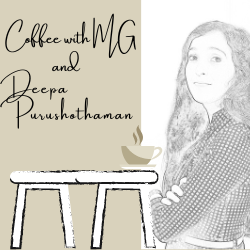 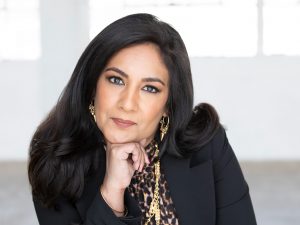 “Racism is not talked about at the work place in Corporate America!”

“Definition of power is flawed…it generates a negative image!”

“Workplaces are full of what I call delusions!”

“The idea that Corporate America is a meritocracy is a set-up!”

So, who is Deepa and why would I have met her virtually? Why would she and I grapple with time zones so that she in California and I in Hamburg could talk? Why have I put her remarks above with exclamation marks?

Well…she has strong views…interesting ones…and the experience to allow her to express them and be taken seriously…she seems to be the voice of many in Corporate America on diversity and inclusion and she is a thorough professional! There…another exclamation mark. Guess why I put it? I received a long document running through several pages about her views and background for the Q&A. I was non-plussed…she beat me to it.

Her views were quite different from those of some people I know in the USA, where, irrespective of race, religion, colour or gender, they have scaled ladders of success as defined by society. Therefore, it was important to meet her…to get a different voice on Diversity and Inclusion at my table.

Meet Deepa Purushothaman, who grew up as one of the only diverse families in a white town in America and leads the diversity talk by having lived it. Life comes full circle, they say. The former partner of Deloitte and a TED speaker would have probably never thought that all the influences that shaped her life would culminate in co-founding nFormation, a community for professional women of colour, offering a brave, safe and new space.

The author of “The First, the Few, the Only: How women of colour can redefine power in corporate America” is earnest, vehement and on a mission to bring about changes in  America´s corporate culture.

“My anxiety would build up much before an actual meeting as I flew from one meeting to another in aircrafts where everything is built for men!” she says mentioning the struggle to stow bags in overhead compartments. I ponder…hmm…yes. I remember trying to shove hand luggage in pre-Corona times in the overhead luggage compartments mostly with the help of attendants or strangers (Psst…I have not taken a single flight since the beginning of the pandemic and now the world can refer to the time before Corona as just that because of the scale of global upheaval. So, you have pre-historic times and pre-Corona times!)

“But diversity is not just about gender…It includes race and ethnicity as well as other aspects of identity” she says, explaining the angst of people who try to fit in, face microaggressions and hold on to negative comments. She apparently interviewed a lot of them while penning her book which make her views a voice-of-more.

On the need to conform, she voiced “Most of the women I interviewed believed erroneously that, once they were leaders in their organizations, they could be more of themselves. But once they reached the top, they were more invested in the company, and it was even harder to speak up, stand out, and be different. One woman I interviewed shared, “They promote you, but ultimately, what they want is a skirt-wearing, dark-skinned, white leader with an accent. We have to let go of the fairy tale of “one day” and realize that no matter what stage we are at in our careers, each action to conform is actually a decision we make, even if it might not feel like it in the moment.”

Why does Deepa consider many workplaces as full of delusions? I found the answer in an excerpt from her book, when we ran out of time.

During the summer of 2020, many companies were doing large feedback sessions or soundings with their employees. Managers and executives were saying things like “I really want to hear your opinion. Your voice matters. I want to know what you have to say.” But many of the diverse employees I spoke with shared that many leaders didn’t really want them to say anything unless it was positive. Some employees even told me, “If what you say causes a ripple, that makes you the problem, not the company’s outdated ways of working.” The truth is, the corporate system can reward groupthink and inhibit the forward progress that most companies say they are encouraging. The delusion that we have workplaces where it is safe to share truths and that we reward open discussion–especially when it comes to race–is a delusion.

I work with a lot of leaders. Too many senior leaders are still afraid to say the wrong thing when it comes to race. One CEO shared with me, “These ideas are too political. I am so afraid of saying the wrong thing.” What I experienced with that CEO is the same position many leaders take: not wanting to be controversial. There is a belief that we can fix inclusion in Corporate America without talking about the hard stuff and making people uncomfortable –this is also a delusion

These days inclusion is stated as a company priority and a CEO and board agenda item, but unfortunately, it’s still just lip service within many companies. One of the white male leaders I interviewed went so far as to call company inclusion programs a form of “propaganda.” It made his company look good, but it wasn’t core to their business. The idea that something is important yet also “not core” to the business is a delusion.

If we are going to create workplaces that truly work for all, we need to evolve our workplace cultures on these important topics. We need to create spaces and places where employees can engage in open discussions about what is happening without recourse. Creating safe spaces like this takes time and takes intention. Leaders need to understand that they will have to get uncomfortable and we will have to talk about tough topics even if they are still finding their words and way. And, we need topics like DEI to be core to the business and not the work of the few. Creating inclusive company cultures is everyone’s business and should be core to every workplace”.

So, “how did the idea of nFormation begin?”, I asked her.

“When I realized that I had become sick, exhausted and disempowered in the process of earning a seat at the table, I began to question everything. Dr Heather was the 14th doctor, who after running a battery of tests, turned to me and said `Your job is killing you, it is not letting you heal.  What would you do if you didn’t do this job, have this career, do you see value in just being you`”

Apparently, health issues and a chance dinner with several professional women set off a train of thought. At the dinner table, several women came up with experiences which were common to the others present…the seed of nFormation was laid.

With strong views and the support that Deepa seems to be getting in the USA, she may soon be heading towards the political arena, I feel.

So, this was a view on Diversity and Inclusion in corporate America, from Deepa´s perspective. Do you agree? Disagree? Have something to add? Do write back to air your thoughts.

With love from warm Hamburg!

← Happenings in Malta Introducing our new hot topic: Climate Change & Migration →
We use cookies on our website to give you the most relevant experience by remembering your preferences and repeat visits. By clicking “Accept All”, you consent to the use of ALL the cookies. However, you may visit "Cookie Settings" to provide a controlled consent.
Cookie SettingsAccept All
Manage consent